Alma Lewis James (1899-1979) was Fairbury’s first Historian. She authored many books, but her most well-known book was titled Stuffed Clubs & Antimacassars.

In 1967, Alma wrote her most famous book, Stuffed Clubs & Antimacassars. To write this book, she used a lot of the material from her 1952 Buckle on the Corn Belt book. At the beginning of this book, Alma cautioned readers that not all the Fairbury tales were documented facts. She recounted that if the readers wanted absolute facts about Fairbury history, they should consult any of the three histories of Livingston County.

In 1878, 1888, and 1909, extensive and well-documented history books were written about Livingston County and Fairbury. These are the three history books that Alma referred to in her 1967 book.

For the title of her 1967 book about Fairbury history, she chose two things unique to Fairbury history. The McDowell brothers were some of the orniest boys to ever live in Fairbury. They developed a new weapon that could knock a boy or man unconscious. One of these new weapons was captured and put on display at the Blade office. It turned out to be a canvas sack, six inches in diameter and twelve inches long. It was stuffed with excelsior and coarse salt. The stuffed canvas sack was tied to a two-foot-long stick. The McDowell brothers would hold the wood handle, swing the stuffed club, and then strike the victim on the back of the head. They often used it on visitors to the town. They also used the stuffed club on Pontiac boys that were trying to date Fairbury girls. The introduction of a hefty fine for possessing a stuffed club ended the use of that weapon.

Back in the 1880s, many Fairbury men used bear grease on their hair.  When they sat down in the wife’s beautiful chair, the back of their head would deposit bear grease onto the chair. To protect their valuable chairs, the wife would place a piece of cloth put over the back of a chair to protect it from the grease. This cloth could be easily washed. This protective cloth is called an antimacassar. 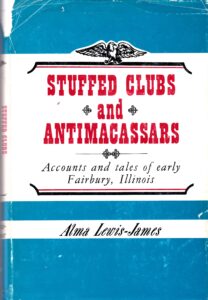 No new copies of the 1967 First Edition of her book are known to exist. They can only be purchased on the world-wide used book market.

The Dominy Memorial Library and the Fairbury Echoes Museum have copies of the 1977 Second Edition of her book.

Descendants of Alma Lewis James graciously donated about 200 new Second Editions of her book. New copies can be purchased from the Fairbury Echoes Museum.

Alma intentionally restricted her Fairbury history research from 1857 when the town was founded up to 1900. She thought life changed too much after 1900 and she was not interested in recounting Fairbury history between 1900 and when she died in 1979. Alma’s book is an entertaining read and provides a glimpse into what life was really like in early Fairbury.